This highly engaging lesson places pupils in the role of detectives.  After a short briefing they have to work out the significance of the various clues found in the bodiless ship burial.  They then use their deductive power to work out which of 4 suspects is most likely to have been the owner.  All this is interspersed with a stunning British Museum slideshow and video clips.  The lesson ends with pupils annotating an image of the Saxon king showing how they arrived at their conclusion.

Set the scene.  Make it seem as if the children are investigating a crime scene – but one with a difference. There is no body!!

There are 12 mounds that look like green Christmas puddings (slide 3), not far from the coast in Suffolk, East Anglia.  A few hundred years ago some of them had been dug into and the valuables they contained had been stolen.  More recently an archaeologist had found some large iron nails in Mound 2 but didn’t think they were important and gave them to the blacksmith.  Then during the hot summer of 1939 over 70 years ago the owner of the land decided to have a look in one of the other mounds.  Nothing could have prepared her for what she would find.  It was the richest collection of Anglo-Saxon finds ever discovered.

You might like to start by showing the first 45 seconds of this short YouTube videoSutton Hoo: Anglo-Saxon Ship Burial  (also linked from its start on PowerPoint slides 2, 10 and 21 at points where you may wish to use it).

The finds are now in the British Museum a priceless hoard of treasure.  But who did they belong to?

In order to work this out, we have to examine the clues, one by one.  We are lucky that the summer when the excavations began were hot and dry because otherwise the sand that held things in shape would have been washed away with the rain.

The finds have all been beautifully photographed and expertly interpreted by the British Museum.  I would not want to reproduce what they have done, so merely point you in the direction of their site.

All I would add is that you are probably best to focus on 6 or so of the key objects that draw most attention to the owner of the hoard. The best way to view them is to use the British Museum’s slideshow helpfully provided on a PowerPoint which I suggest you download first as it is a 6MB file.  I then suggest you print clue sheets for just 6 of the finds shown on the KSH PowerPoint slides 7,8 and 9, in the following order.

1. Helmet. Pupils deduce that he might be a warrior.
2. Sceptre. Pupils deduce that he might be a king.  Explain that this is a symbol of kingship.
3. Shield. Not just a warrior but very rich indeed. Idea of a superking.
4. Sword. Obviously a warrior king but incredibly decorative.
5. The spoons. These are hard. Pupils need to know that they were Christian, because they had the names of Saul and Paul on them.  In other ways the burial is pagan. This suggests that the king might have been torn between pagan and Christian.
6.The collection of coins is the killer evidence about dates. Focus mainly on that.

More able pupils can be given the collection all at once of course.

Individual images can be accessed from the museum web page with gold coins, along with detailed interpretations, by selecting any of the 10 related objects to be found on the right of the screen.

Focus on slides 7 and 8 to show how deductions about the possible owner can be made. The spoon evidence in particular will need explanation.

To consolidate this learning, return to the video and show the section starting with the discovery of the finds (6 min 15 sec from the start) lasting just over two minutes (to 8min 37sec). TAKE CARE TO STOP BEFORE the final section revealing the identity of the owner.

Pupils should now be able to tackle the activity on slide 13, which asks pupils to identify the clue which allowed this deduction to be made.  Here are some possible answers – they are by no means exclusive.

A. The wealth of the objects including things that were not meant to be used e.g. the sword and helmet show the importance of the owner.
B. The sceptre shows he was a king.
C. Coins give a date for his life.
D. The fact that the burial took place deep in East Anglian territory indicates where he lived.
E. Spoons suggest he was a Christian at some stage.
F. The sheer wealth and status of the objects suggest that he was more than just a local king.

Show the slides 11 and 12 which are artists’ reconstructions of the final scene as the burial was put together.

Slide 14 now poses the crunch question. In whose honour was the bodiless burial?  Who was the owner of all these treasures?  Slides 15-18 run through some of the likely contenders.

It is now time for pupils to make their decision.  Ham it up a bit if you like with the theme tune from Who Wants to be a Millionaire.  I’ll leave you to Google and copy this which I can’t do for you because of copyright restrictions.

The answer, which is Raedwald (probably) can be given from the final minute of the YouTube video starting at 8 minutes 54 sec.

It is worth stressing that we cannot know for sure. Written evidence from this period is sparse and we must be cautious about being too firm in our conclusions.

This leads onto the final task. Print off slide 22, one per pupil.  Ask them to add to the picture any of the important clues they think have been left off the picture. They should then explain what the object tells us.  Model this on the Interactive WhiteBoard.  Naming the object is not enough.

Now for the brain teaser: Can anyone spot the deliberate mistake in the picture?  Wait some time for the penny to drop with all pupils.  This was, after all a bodiless grave – a cenotaph.

Just as the children are about to finish, remind them that history is constantly being re-written.  Show slide 23 from the Staffordshire hoard discovered in the summer of 2009. This is yet another example of Saxon craftsmanship about which we knew relatively little until 70 years ago!

At the end of the lesson if you are looking for a more creative outcome for this learning why not try the approach suggested on the page introducing the lessons on the Saxons.  Pupils have to prepare a 45 second, to-camera presentation as if at the site of the Ship burial. They have to talk with excitement as if they have just discovered the identity for sure. This is a valid activity for pupils to be expressing their own opinion as we cannot be absolutely sure whose grave it was. Pupils use clues which they can ‘show the camera’.

For background on the excavations go to the British Museum’s site.

The mystery of the empty grave. 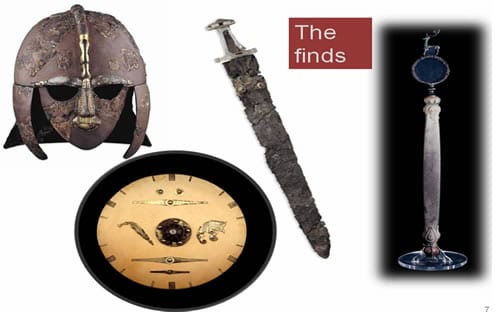 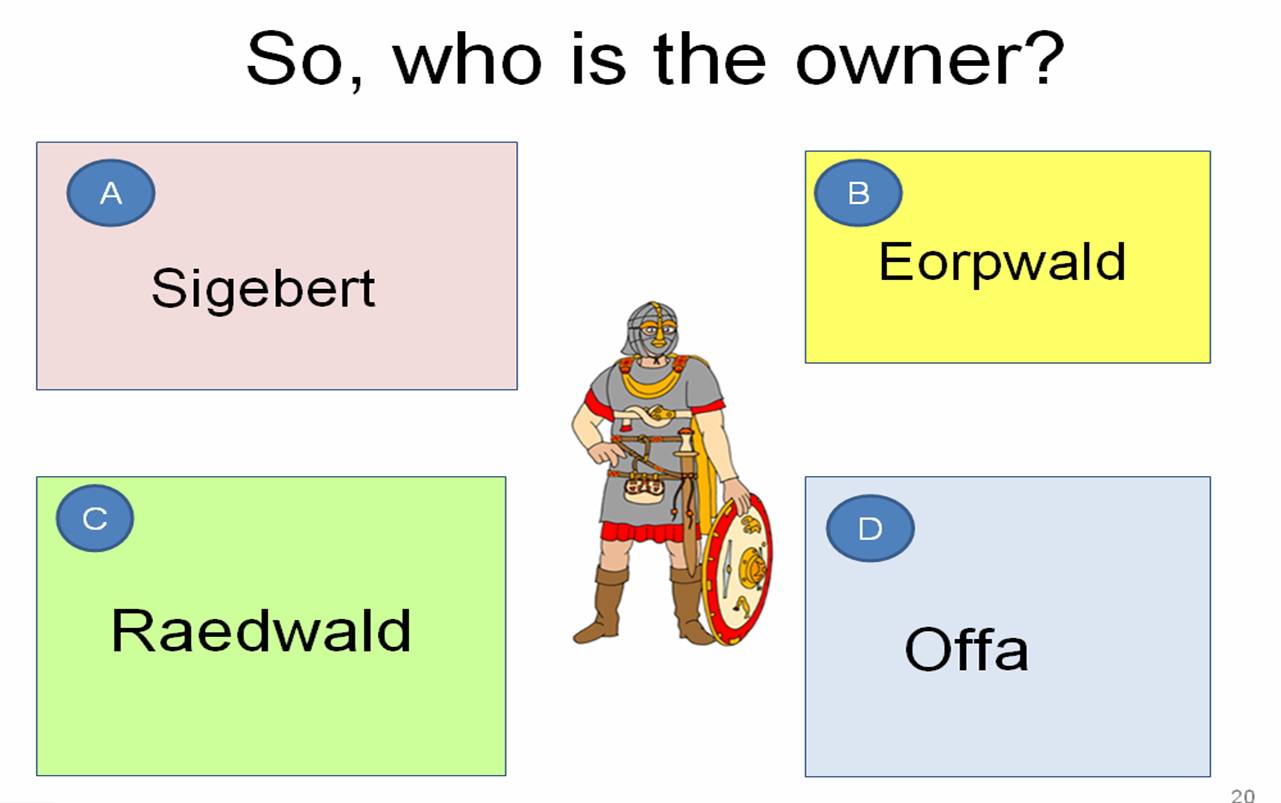