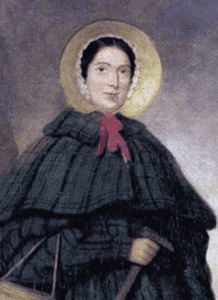 Growing in popularity as a strong alternative to Grace Darling and Florence Nightingale, studying Mary Anning at KS1 offers some clear advantages.

Not only is she a remarkable talent but she also achieved much of her famous work at an age not so far removed from the children who learn about her. She is a great role model for young girls, being so accomplished in a such a heavily male-dominated world.

This topic is highly suitable for Y2 pupils and serves as a great example of a significant young woman achieving an amazing amount in a short time in what was a man’s world. At a time when women rarely ventured into the realms of science this young girl took the world by storm. As an inspiration for young girls to think what might be possible in their lives, this life story has a lot of the ingredients to spark pupils’ interest: dinosaurs, exciting finds, managing to sell her fossils in hard times, and a dog of course!

Pupils have lots of opportunities for hands-on activities, working with fossils, as well as consideration of historical evidence and coming up with compelling reasons why we still remember this young girl’s achievements 200 years later. Recent press coverage of attempts by children to honour her relatively neglected memory gives pupils a connection between past and present and the opportunity to express their admiration in the devising ways to commemorate her remarkable life.

You need to be logged in to view this content in full. Please Login or register
This introductory session attempts to place Mary's life in a broader context of time and place and to whet pupils' appetite, without telling much of the story of her life. This follows in the next session. key to the introduction is the use of sources...
Read more
Pupils move from the sequencing of the major events of Mary’s life to a more sophisticated understanding of which of these events were the most significant. By creating a fortunes or living human graph, pupils are able to see the ups and downs of her...
Read more
This a much shorter enquiry than the others, and comprises just three short activities

Having recapped the story of Mary’s life, ask pupils to work in small groups to generate adjectives to describe Mary’s character.

Pupils are then shown a list of pre-prepared adjectives on...
Read more
This activity is an interesting way of getting pupils to think about Mary’s life but in a non-narrative way. Instead of re-telling the story in sequence they have to look back over her life and to think about which characters played a significant role. The...
Read more
The main activity in this session is called Prove it! A number of pieces of evidence from Mary’s time are placed around the room, as if it were an art gallery. Pupils are not given 10 statements about Mary’s life, provided as RS1 but are...
Read more
In Lyme Regis they are going to improve their museum dedicated to Mary Anning. It will cost a lot of money and the Council are not sure she deserves all this money being spent on her. Pupils have been asked by the locals to write...
Read more