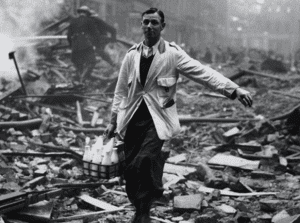 A study of an aspect or theme in British history that extends pupils’ chronological knowledge beyond 1066.

The purpose of this unit was two-fold: firstly, to offer opportunities to develop big picture overviews of topics which help pupils to appreciate the long arc of history; secondly, to give pupils a chance to study more modern history.

For many of you this will offer scope for an imaginative new unit of work. For others, it will be a chance to reconfigure some of the units from the previous curriculum that were in danger of being lost.
This new unit of work called Beyond Face Value is a series of skills-based enquiries looking at the way powerful people have manipulated evidence for their own ends and have tried to persuade others of their version of the past.

The case studies we have based the unit on deliberately draw in important historical content which all pupils should know about but which are no longer compulsory: the Tudors; Victorian Britain and Life in Britain During World War Two. Each of these has been popular in primary schools for decades and there is no good reason why they have been excluded from the compulsory pary of the National Curriculum.

The specific studies have all been chosen because they cast light on problems of evidence. By Y6 pupils should be looking at sources not just for what they tell us but should be aware that sources often disagree and then historians have to puzzle out who is telling the truth-pretty much a skill for life in the age of fake news!

The case studies are:

a. Portraits of Henry VIII and Elizabeth I
b. Factory owners and factory workers’ contrasting versions of what factory life was like, to get pupils to understand vested interest.
c. Evacuation: whose version should we believe? Showing how government try to create a deliberately partial version of events for a particular purpose i.e. to boost morale , and how censorship was employed in wartime.
d. the Blitz; highlighting the way the government used propaganda, an important idea for Y6 pupils and brilliantly prepares pupils for Keystage 3 work which focuses heavily on which version of events should we believe and why.

You need to be logged in to view this content in full. Please Login or register
This is a really fun lesson which shows children what is meant by historical interpretations in an engaging and accessible way.  It appeals to both visual and kinaesthetic learners by using the police line-up approach. ...
Read more
This powerful lesson on Tudor portraits as propaganda gives pupils the chance to appreciate that things aren’t always what they seem. Elizabeth wanted to be shown in a particular light as she grew older. Can...
Read more
In this lesson, pupils are shown 3 images of factory conditions from early/mid Victorian times. Using their knowledge of factory reform they feel confident that they can date the factories. They are asked which factory...
Read more
This lesson revolves around a single painting entitled Work, painted by Ford Madox Brown between 1852 and 1865. Using Fastest Finger First pupils are encouraged to explore the full detail of this fascinating painting before...
Read more
Two great tasks which together make up Key Question 5 of the Britain at War medium term plan, Why is it so difficult to be sure what life was really like on the Home Front?...
Read more
In this fascinating lesson pupils learn how photographers avoided the censors they saw in KQ5 and how the government used certain images of the Blitz as propaganda, even though they didn’t happen as they appear....
Read more