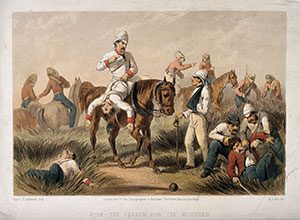 KS3 outstanding lessons on India from 1500

As part of the current National Curriculum requirement to teach a significant issue or society I have opted to look in detail at India. Not only does this dovetail neatly with subsequent work on the empire and post-war colonialism, it also offers pupils a fascinating insight into another culture that they will not experience at KS4.

More than that, it offers superb case study material that enables pupils to compare what was happening in the west in the 16th to 19th century with society in India.  There are plenty of opportunities for work on interpretations as well as analysis of a rich array of artistic evidence.

Just uploaded is The Great Mutiny/Rebellion of 1857, which address two linked questions:
a. How did a bullet help cause a mutiny even before it was fired?
b. Why did a mutiny lead to a major rebellion which changed the course of Indian history?
Throughout the enquiry there is a strong emphasis on contrasting perspectives, interpretations and modelling effective explanatory writing.

After that an overview enquiry, What can the study of India tell us about the British Empire? Good opportunity to look at events from Indian perspective.

This lesson is aimed at Y9/GCSE students. It addresses three principal aspects of history teaching:
Read more
This enquiry asks students to look critically at the depiction of the massacre in the film Gandhi as a way into trying to determine the motivation of Dyer.  Students are provided with an initial set...
Read more

Reasons for studying this period above the other tempting options are: