For years history teachers have been using writing frames. Some are better than others. Some are downright unhelpful . It s not that structure is unnecessary its just that some frames emphasise the wrong things. When answering an explanatory mode, for example we don’t want pupils to write ‘One reason was’, ‘another reason was’, ‘it was also because of’. This approach privileges listing over prioritising. Why is this important? I’ll let EH Carr explain

The true historian, confronted with this list of causes of his own compiling, would feel a professional compulsion to reduce it to order, to establish some hierarchy of causes, which would fix their relation to one another, perhaps to decide which cause, or which category of causes, should be regarded ‘in the last resort’ or ‘in the final analysis’ (favourite phrases of historians) as the ultimate cause, the cause of all causes. This is his interpretation of his theme; the historian is known by the causes which he invokes…every historical argument revolves round the question of priority of causes.

I am drawn to examples of KS2 writing where pupils try to drive at the heart of the issue, without a frame in sight. 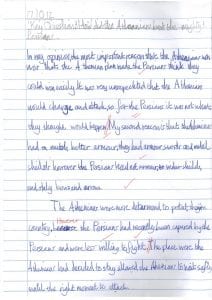