Where does our knowledge of the Anglo-Saxons come from?

It is important that we ask the recurring question How do we know? at least once in each topic, if pupils are to grasp that history is not THE story of the past but different  constructions of the past , based on evidence.  For pupils to make any sense of this they need to know that sources of evidence are fragmentary and partial.  There are big gaps when the sources run dry, so historians have to reconstruct what they can. But there lurks a hidden danger. Not all sources can be trusted to tell how things were. Often there were vested interests along the lines of ‘he/she would say that wouldn’t they’. Sometimes writers had poor access to information. Often they simply copied from others, often elaborately.  So the more pupils can see contrasting viewpoints and then are able to explain them the better. This is a long journey, but please don’t leave it too long to start.

Lessons on this site on the Vikings , especially Key Question 2, address this question head-on. So I thought you might like to think of doing the same for the Saxons.

There are three principal written sources:

a.Gildas a  British monk who wrote a history in 540 AD focussing on the period when the Anglo-Saxons arrived. He was obviously recording waves of invasions into his country and took a negative view referring to the Saxons as’ fierce and impious..a race hateful both to God and men”

b.Bede’s history of the English people covers the next 200 years. Bede was also a monk ( hardly surprising as they were the literate ones) so he has an early Christian viewpoint at a time when England’s religion was in a state of flux. Bede has become a very influential source for those studying Saxon England, not least because he it was who started our current system of dating.

c.The Anglo-Saxon chronicle which was written during the reign of King Alfred so about 150 years after Bede and thus the mist useful source for finding out about the struggle with the Vikings, if only the period before 990 AD. In terms of the writer’s viewpoint, which we must always consider, pupils need to know that the Chronicle was written at Alfred’s court and tended to show the Saxons in a very positive light compared to the Vikings. Some might describe the account as propaganda.

There are a number of other non-literary sources as well, some of which feature in the outstanding lessons on the site. The first is evidence of sites containing remains of cremations which give us a clue to where people settled at different stages of Saxon occupation. (See Bells and whistles lesson)  The second is place name evidence. 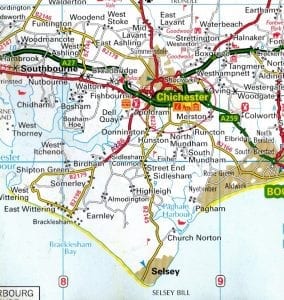 A map such as the one shown here of the area around Chichester could be used to compare place name ending with Roman ones and later with Viking ones. Thirdly, there are artefacts themselves, ranging from humble day to day objects to the impressive Alfred jewel and the Staffordshire Hoard which the view  that the Saxons were highly skilled craftsmen. Then there are a few key sites where Saxon villages such as West Stow which have been reconstructed from evidence to give us a clearer view of daily life in Saxon times.