Among the items found this week in Peebles in Scotland were a complete horse harness, preserved by the soil, and a sword that have been dated as being from 1000 to 900 BC. They also found decorated straps, buckles, rings, ornaments and chariot wheel axle caps. Evidence of a decorative “rattle pendant” from the harness was also discovered — the first one to be found in Scotland and only the third in the UK. Isn’t it amazing that such rare 3,000 year-old objects still with organic matter attached are still being found relatively regularly thanks to responsible detectorists.

Another Bronze Age find drawn to the public’s attention again recently is this mangled Bronze Age cup. The age and rarity of the Ringlemere Cup, one of only two Bronze Age cups found in England, had persuaded the British Museum to purchase it despite it being “severely misshapen presumably after being hit by a farmer’s plough. The cup is at the top of the museum’s list, which is published in the BBC History Magazine 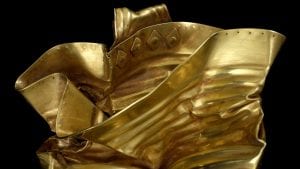