This is a question that has concerned many primary teachers for a long time. I have sat in the back of classrooms where the first activity was a meaningless and mind-numbing drawing of a timeline with key moments from Ancient Egypt carefully but pretty pointlessly marked. Equally, I have seen pupils really enjoy this topic without ever having been asked to think how long ago the pyramids and sphinxes etc were built.

Does it all matter? Well, yes, it does but you need to get a sense of proportion. If you are teaching this topic in Term 1 of Y3, with pupils just 6 weeks out of KS1 you won’t want to be talking about dynasties and complex merging of kingdoms .You will want to explore the term ‘ancient’ and will want to use phrases such as ‘5,000 years ago’ knowing full well that most children will have only a hazy ideas of what that  means. But it’s a start-an important one.

In the upper part of Key Stage 2, on the other hand, you can start to introduce other concepts of chronology such interval and duration as well as sequence. Pupils could easily grasp that Tutankhamun and the pyramids are over 1,000 years apart. Tutankhamun was buried in a tomb in the valley of the Kings not in a pyramid. Things changed over this vast period of 3,000 years. You might also like to look at one or two named pharaohs to show similarity and difference over time. A new lesson looking at artefacts (email me for details)  uses two objects to draw pupils’ attention to change over one time: one shows the uniting of upper and lower Egypt , the other the way Tutankhamun’s father and mother, Akhenaten and Nefertiti changed the religion from worshiping many gods to recognising only one, the sun god Aten. Pupils could be shown that this happened roughly in the middle of the period being studied. 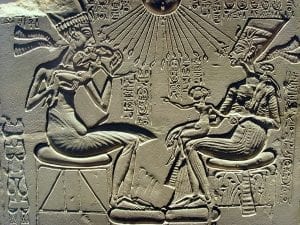 Another important dimension is the issue of comparison. When pupils look at what early civilizations had in common, it is a great opportunity to look at what was happening elsewhere at that time. And this is where timelines really do come into their own. Look at how long the different civilizations endured. This will highlight how much longer the Ancient Egyptians ruled, right up until the Roman period. And here we have two other elements covered; duration of empires ( how long did the Romans/Maya/Benin empires last compared with the Egyptian?) and sequence. How did the Greeks and Romans relate to the Egyptians? By seeing this ‘Big Picture’ of the past and its inter-relatedness we stop pupils seeing history as a series of unconnected topics. It will take time for this to bed in , but the more we keeping looking back and forwards in time, the more secure pupils’ chronological understanding will become.