If life was so hard for families in the towns why did so many leave the countryside and move to the towns in Victorian times? – a history mystery

Starting a lesson with an apparent contradiction is a good way of engaging pupils interest. This ‘history mystery’ makes excellent use of pupils’ thinking skills, enabling them to make their own meaning using information cards which they use to create different patterns of thought. The all-so-important debrief session  allows you not only to review their explanations for this seeming paradox but also to ask how they arrived at their conclusions.

Start with a puzzle to remind children about the contrast in life expectancy between town and country.  Show them slide 3 which has a table of life expectancies.  What do they think the missing figure is? It is 18.  So why would any parents want to move a young family to the towns where health and hygiene were so poor.

It is common practice in some schools to tell the pupils the ‘three reasons’.  I want them to work the reasons out for themselves, making their own meaning.  One of the most effective ways is to give the children information in an unprocessed form – in this case on cards.  No information has any greater authority than any other.  It is for the pupils to invest them with meaning and weight.  If you feel your pupils are not quite ready to be launched into a full-blown history mystery, you can always give them a sorting activity (using the cards provided as a downloadable) in which they distinguish between the pros and cons of living in an industrial town.

Having set the challenge of answering the puzzling question, and having issued the cards (see downloadable file), the pupils in small groups of no more than three have to make sense of the information and may start to create shapes with the cards.  Some may be discarded because they are irrelevant.  Some may be given higher status; some may be grouped as linked reasons.  All the time the pupils are thinking of ways of processing this information.  Inevitable disagreements will occur as to the best way of proceeding, not least among more able pupils who are certain of the superiority of their approach.  Dealing with these differences is an important part of working together in this way.

It is important not to rush this activity. Although the pupils will want to know if they have the ‘right answer’ what you are looking for is their ability to work with a number of ideas.  When the time has come for them to start feeding back, try to encourage the pupils to talk about HOW they thought through the problem – how they organised their ideas.  They will have used a wide range of skills in getting this far: interpreting the information; sorting relevant information from irrelevant; classifying; making links between disparate pieces of information; speculating to form hypotheses.

Clearly there may be issues that pupils want to explore beyond the limited amount of information on the cards.  If they show signs of wanting more this is great.  The skills of research and cross-referencing come into play.

Now comes the time to show their understanding – which they can do in a variety of ways. Some may want to role play the members of the family.  This is fine, though you would want to ask the question at the end “Would this have been the same for all families, do you think?”  Many children will benefit from simply completing the speech bubbles in the picture on slide 5.

Why did people leave the country for the towns? 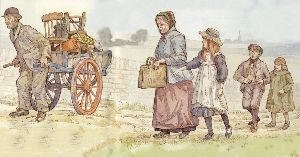