If you have ever found it difficult to motivate boys looking at the Inter-war years from 1919-39, why not try using football to tell the story. This quick activity, supported by a fully illustrated PowerPoint (with photos and video clips), uses football to mark out some of the key events of the inter-war years and touches on the following points:

a. Germany’s diplomatic isolation in the early 1920s (she was not invited to attend the 1902 or 1924 Olympics and the FA did not arrange any football fixtures).

b. Germany’s coming in from the cold during the Streseman Years. (in 1928 she was invited to participate in the Olympics)

c. Germany was accepted by the Allies (The first full international between England and Germany since the war took place in 1930. It was a draw)

d. The return fixture, scheduled for 1935, was greeted with considerable opposition, not least by protests from Jewish organisations ( England won 3-0)

f. At the May 1938 match English players had to give the Nazi salute to Goebbels, Goering, Hess, Ribbentrop (Hitler was not present). British were frightened of antagonising the Nazi regime. The German team contained former Austrian players, following Anschluss. (England won 6-3!)

g. The return match was scheduled for 1939-40 and never happened, nor did the fictional one in Escape to Victory!! The next match was actually in 1954 and England won again 3-1. (Stanley Matthews played in this match as he had done so brilliantly in 1938! Even Beckham’s international career won’t be that long! )

You might want to put the presentation on your VLE or intranet so that selected students could access it at different times to normal lessons. A similar approach can be taken to looking at key 20th century developments through the device of the Olympic games. 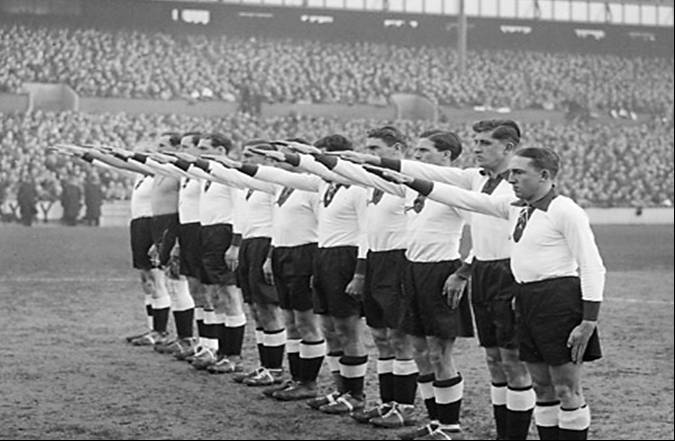