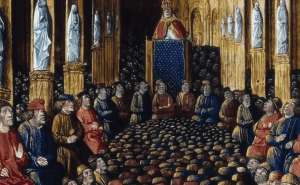 As medieval history is taught mainly in Y7 in UK schools, this represents quite a departure for GCSE history teachers.  As all boards have to comply with this, that means there is strength in depth, especially regarding resources.  All boards take a different slant, of course.  Some focus on the Normans, others on King John.  Here are some typical medieval questions that appear on the draft specification specimen papers.

Lessons on each of these questions will follow shortly.

This short task puts pupils in the role of spin doctors who have to ‘big up’ the reputation of Richard the Lionheart. There is a lobby of people who feel that his statue outside the Houses of Parliament should be replaced with a more suitable...
Read more
Great lesson on the reasons for the First Crusade which uses a Zone of Relevance activity to show students how to answer the question set, not the one they want to answer.  This is followed by a critique of a KS3 diagram.  Students have to...
Read more