This is the first lesson on an enquiry into Grace Darling: what she did, and why she was famous. The kernel of the lesson is a slow reveal activity which works really well on an Interactive White Board.  The key image comes from the front cover of Channel 4’s excellent  book on Grace Darling in the Famous People series.  Pupils are shown small parts of a picture, not the whole image. By working on these part/whole relationships, pupils really do develop their thinking skills. I am very grateful to Shirley Evans of Lee-on-Solent Infant School for sharing her teaching approaches with me and for C4 learning for giving their permission to use the core image from their excellent book on Grace Darling in their highly successful Famous People series.

This lesson introduces Year One children to a famous person.  The principal objectives are that children can work out for themselves why this person, about whom they know nothing, might be famous.  This will involve them in developing specific thinking skills of deduction and prediction.

To begin, you will need to ensure that children have a secure understanding of the term famous and to know what it means in terms of famous people today.

The second part of the presentation introduces our famous person , Grace Darling.  This is done using an interesting technique called slow reveal, using the front cover of the excellent Channel 4 book on Grace Darling. This works wonderfully on an interactive whiteboard using the blind facility to gradually reveal more of the picture behind.

The purpose of doing it this way is to encourage children to develop the ability to work some things out for themselves, without having to be told. They try hard to see the relationship between a small part of the image and the whole picture.

The image is best revealed in three stages.  The first stage simply shows a lady in a rowing boat at sea.  As this is a fairly recognisable image for most pupils, ask them to talk to the person next to them about what they can see.  Encourage them to take it in turns to mention two or three things each.  Suggest they comment on her appearance, her expression and her clothes and what she might be doing, then ask for ideas from the whole class.  Log these on the interactive whiteboard for later reference.  This gives you the chance to develop some new vocabulary for some children, such as row andcloak.   Many will come up with ideas such as.. She’s got a boat and she’s worried.  She’s trying to escape.   It’s windy.   She’s wearing a cape .  She can see a shark .  She’s in a pirate’s boat.

Now build up the element of anticipation.  “Are we ready for the next part of the picture?”  There is no need to do the paired work again, and it is important to keep the pace up.  From the second revealed section they should now be able to comment on new images but also be able to further develop their prediction about what is happening to her. Typical answers might be : “It’s a lighthouse!  Maybe she’s running away.  She’s trying to escape from the lighthouse.  She’s come from the lighthouse because it’s her home.”  Again, log new vocabulary on the board.

Now reveal the third piece of the jigsaw to which pupils have responded in this way:  “Maybe the boat is sinking” and even, more alarmingly, “Maybe her husband is after her.”

Now the final piece is shown.  Although this adds little to the narrative it does allow you to dwell on her name and the period when she lived.  Stress the concept of a long, long time ago, before there were cars, computers , telephones etc.   The ideas pupils may come up with could be: “It says Grace Darling.” This could start a short discussion about the dates, which mean nothing to the children but they discover, then, that she died when she was very young. Why might that be? and they suggest  She fell in the water?  She got sick?

At this stage, try to come up with a class consensus about what is happening which then can be looked at after they hear the story of Grace’s rescue. You might want to save the ideas by scribing them onto your interactive whiteboard.

By approaching the topic in this way, pupils get far more involved from the start, they develop key vocabulary to make sense of the story to follow and are more interested in the story to see if their predictions were right.

Who is our famous person can we work out why is she remembered? 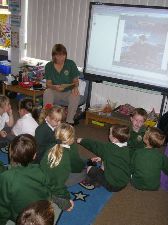