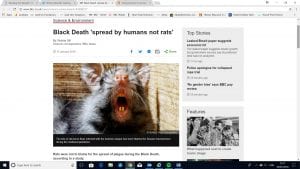 Just when we thought we had the teaching of the causes of the Black Death licked along comes Prof Nils Stenseth, from the University of Oslo.

He and his colleagues then simulated disease outbreaks in nine cities, creating three models where the disease was spread by:

In seven out of the nine cities studied, the “human parasite model” was a much better match for the pattern of the outbreak.

It mirrored how quickly it spread and how many people it affected.

“It would be unlikely to spread as fast as it did if it was transmitted by rats.

“It would have to go through this extra loop of the rats, rather than being spread from person to person.”